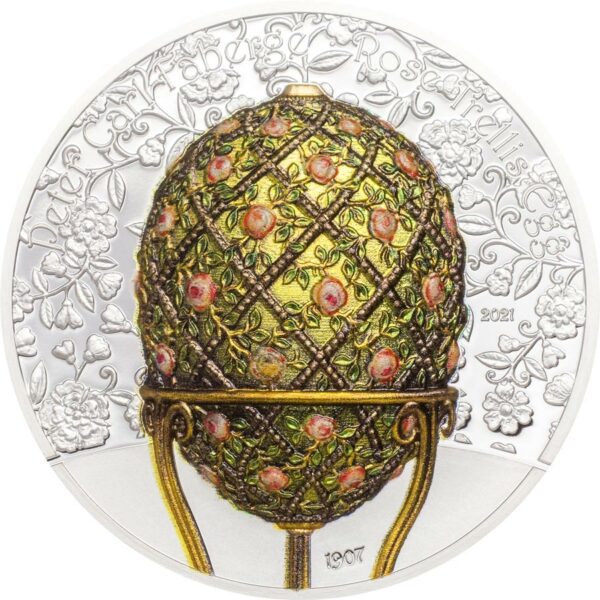 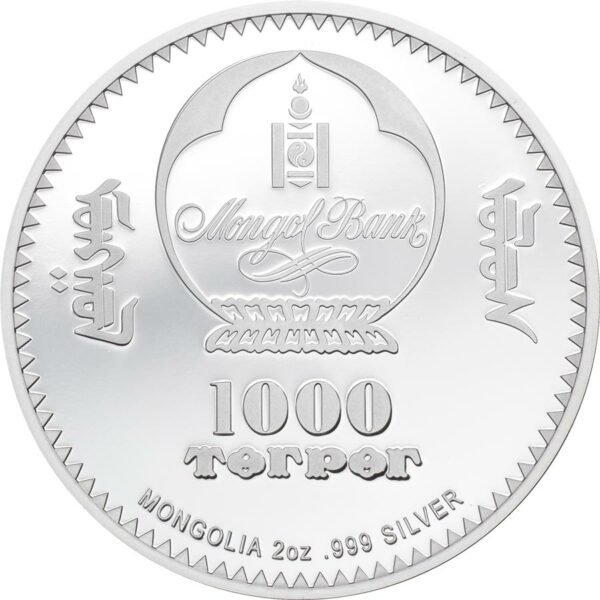 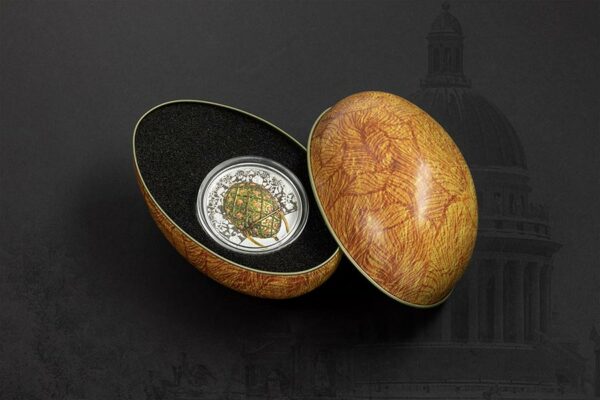 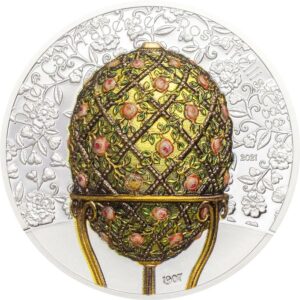 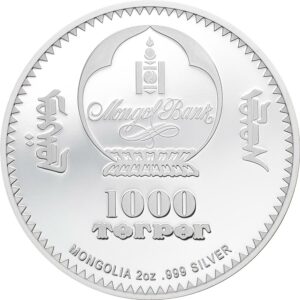 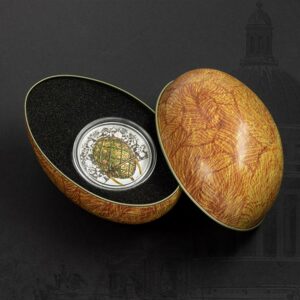 This is the 2nd edition of a coin honoring a very famous work of art. Faberge Eggs are known as priceless treasures that were specifically made for Royalty and some of the wealthiest families in the world. Last year for the 100th anniversary of Peter Carl Faberge’s passing, we introduced the first Faberge Egg which sold out very quickly.

This time the coin is dedicated to the famous Rose Trellis Egg which was created in Saint Petersburg under the supervision of Peter Carl Fabergé. Much of the work was done by his workmaster Henrik Wigström in 1907. The Rose Trellis Egg was a gift from Tsar Nicholas II to his wife, Alexandra Fedorovna commemorating the birth of their son. Each of Fabergé’s Imperial eggs contained a surprise, to delight the tsarevich. This particular egg hid a diamond necklace and an ivory miniature portrait of Alexandra Fedorovna framed in diamonds — unfortunately, these items are now lost to history.

The mint has utilized its world leading colorization techniques and combined them with its smartminting© high relief to produce a coin worthy of this cultural icon. The Rose Trellis Egg is struck in 2oz fine silver in stunning high relief. The proof is partially gilded and colored to capture the beauty of the original egg. Delicate floral ornaments in light relief are depicted in the background. The year 1907, when the egg was forged, can also be seen. This proof is limited to only 888 pieces worldwide and will be presented in a custom presentation case that is in a shape of an egg.

The real Rose Trellis Egg is crafted of gold, green and pink enamel in various shades, portrait diamonds, rose-cut diamonds and has a satin lining. This egg is enameled in translucent pale green and latticed with rose-cut diamonds and decorated with opaque light and dark pink enamel roses and emerald green leaves. A portrait diamond is set at either end of this egg. The egg is approximately 7.7 × 5.9 cm in size. Since 1952 it has resided in the Walters Art Museum in Baltimore, Maryland.

How much would a Faberge egg cost today? Peter Carl Faberge charged Tsar Nicholas II 8300 rubles for the Rose Trellis Egg in 1907, roughly a half a million US dollars today. Certainly the egg would fetch far greater than that today.